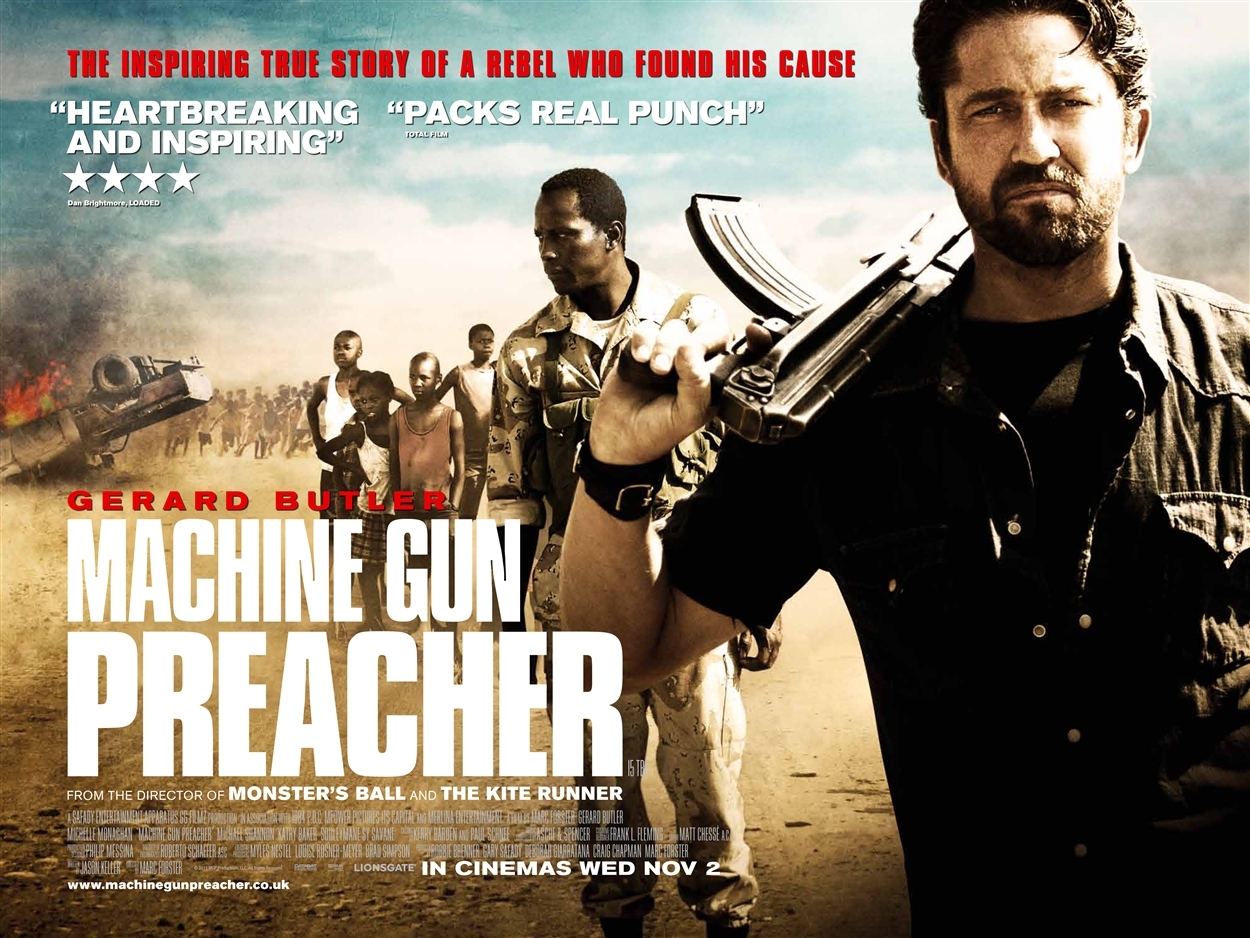 The film is an adaptation of Childers' memoir Another Man's War. Although the film centers on Childers, it starts off with a scene in South Sudan, where the LRA are attacking a village. This opening scene is placed into context later in the film. Childers was an alcoholic drug-using biker from Pennsylvania. On his release from prison, he finds that his wife has given up her job as a stripper, because she has since become a Christian. Eventually, after almost killing a vagrant the night before, his wife persuades him to go to church with her where he is eventually converted.

Later, on a missionary trip to Uganda to build homes for refugees, he asks one of the SPLA soldiers watching over them to take him on a trip to the north, to Sudan. The soldier warns him that it is a war zone, but upon Sam's insistence they go. They arrive at a medical tent in Sudan, as his friend moves off to talk came in to some people, Sam is roped in by a redheaded female doctor to help lift a lipless Sudanese woman onto the examination table. That night as they lay on their beds at the relief station, they hear noises outside, when they look out Sam and the soldier see large numbers of Sudanese children swarming in to sleep outside the building. The soldier explains that their parents send them to sleep over there because it is safer than staying in their own village. Sam wakes up the children and gets them to sleep in their room for the night. The next day they follow the children back to their village only to find that the LRA burnt it down and killed their parents. Then one of the children runs after his dog and dies upon stepping on a hidden landmine. Sam then decides to build an orphanage for the children of South Sudan. After the orphanage is built, the LRA attack it under cover of night and burn it to the ground. Sam then phones home, telling his wife what happened and that he is giving up. She reminds him that the orphans have been through worse but they have not given up, and that he should not give up and tells him to rebuild the orphanage.

Gerard Butler In «Machine Gun Preacher»One night after the orphanage has been rebuilt, he and his friends from the SPLA are attacked on the road by the LRA, they manage to chase off the small force of the LRA that attacked them. They then search the area and discover a large group of Sudanese children hiding in a ditch not far from the road, since they can not take all the children in one trip, Sam chooses to take the ones who need medical attention along with a few others on their first trip back to the ophanage. However, upon returning to the spot as quickly as he could, he finds that the LRA burnt those he had left behind. It is from here he leads armed raids to rescue children from the LRA.

In the end credits are included black and white pictures of the real Sam Childers, his wife and his daughter plus his orphanage in Sudan. The pictures are followed by a short black and white home video clip of Sam talking about his work, all the while with the credits rolling on left hand of the screen.

Machine Gun Preacher is a 2011 action biopic film about Sam Childers, a biking preacher-defender of African orphans. The movie was written by Jason Keller, directed by Marc Forster and stars Gerard Butler as Childers.

It tells the story of Childers and his efforts to save the children of South Sudan in collaboration with the Sudan People's Liberation Army (SPLA) against the atrocities of the Lord's Resistance Army (LRA).

Filming commenced in June 2010 in Michigan. The film had a gala premiere at the Toronto International Film Festival on September 11, 2011 and limited release on September 23, 2011.